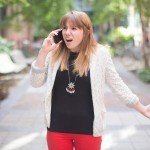 This article really resonated with me.  I couldn’t say it any better,–this IS who I am.  I don’t have another minute of my life to waste on bullshit.

No More Bullsh*t: I Won’t Talk To You Unless You Say Something Real

I’ve reached an age at which the only sh*t I can stand is what’s coming out the other end. I don’t know if it’s something that happened with age, maturity or intelligence, but I can no longer entertain any conversation that doesn’t involve real meaning or opinion.

It may turn some people off, come across as abrasive or too personal, but if you’re going to talk to me, you better have something to say.

We live in a generation inundated with bullsh*t on a daily basis. Through Facebook, Twitter and Instagram, all we see and hear are empty words and superficial conversations. Nothing is real, and nothing is actually being said. It’s all just noise — annoying, unproductive noise.

I’m sick of all the noise; I’m so f*cking tired of all the empty words and uninformed opinions. There’s too much being said with too little meaning. We’re all talking, but no one is saying anything.

It leads to death. Premature death. Because if you’re not being real, you may as well be a f*cking corpse. If you’re spouting other people’s opinions instead of your own, you’re not even your own person.

So let’s all be real for once and start having conversations that actually matter. Otherwise, let’s just stop talking altogether.

Good conversation can change the world. One sentence can change the direction of your life. Why waste your days listening and spewing meaningless words when you could say something that matters?

Once you start having meaningful conversations, you’ll realize every conversation is just an opportunity to learn and grow.

If the point of small talk is to get to know someone, I’d rather just save us both the time and walk away now. I don’t need new friends, but I do need new conversation. I need people who are going to excite me and interest me. If you don’t have anything to say, you have nothing to offer me.

We’re too old not to have real opinions and thoughts.

We all hit a point in our lives when we become the person we’ll be for the rest of our lives. That time may come sooner for some than for others, but at a certain age, you should have independent thoughts and opinions. Just because someone doesn’t agree with you doesn’t mean you don’t deserve the chance to state them.

People who don’t know how to form real opinions aren’t people at all. They’re empty shells wasting away on dry conversation.

Silence is better than bullsh*t.

People underestimate the value of silence. There is nothing wrong with sitting next to someone and saying nothing. We only have so many breaths in life, why waste them on nothing? Why waste your life and your time on people who aren’t adding anything at all?

Rather than spend an hour trying to say the right things, I’d rather spend that time getting to know you. If, by the end, we realize we don’t like each other or have nothing in common, then that’s time well spent. Finding out you don’t get along with someone is a lot more important than talking about the weather for an hour.

Good conversation is as stimulating as black coffee and just as hard to sleep after.

While most words are empty, some conversations can be so fulfilling, they reinvigorate you and give you new purpose. Once you’ve experienced the life-changing effects of good conversation, you realize there’s no way you can have any other kind.

We’re worth more than surface conversations.

Life was meant to be lived, and good conversation is the epitome of a fulfilled life. It’s the words, opinions and lessons of those you interact with that give purpose and meaning to your life.

Lauren Martin is a Senior Lifestyle Writer at Elite Daily. After graduating from PSU, she moved to NYC to write fart jokes at Smosh Magazine. Making her way to ED, she now writes riveting commentary on nude pics, condoms and first dates.